NB: All links are for students enrolled in this class. At the end of semester, all sources not readily available on line will be unlinked from this site.

Please read and review the assigned works for class on the day that they are listed.

Assignments are due on the dates listed in the schedule.

Readings not included in the Required Books will be made available online via the course website, and are marked in the schedule with an asterisk (*). All materials I make available to my class via DropBox will be removed at the end of semester.

This schedule is subject to change according to the pace and interests of our class, as well as other opportunities that arise during the semester.

Suggested readings are included below, and when possible, links will be provided to them.

Others will be added throughout the semester to the website.

Introductions: Syllabus and Requirements; Overview of Atlantic World Studies and the Black Atlantic; Historical Contexts for Primary Texts as well as the Scholarship/Recovery History; Shifts in definitions of “race” in the seventeenth, eighteenth, and nineteenth-century; Anglophone culture and the British Empire. Race and Visual Culture in Britain.

*Gerzina. “Paupers and Princes: Repainting the Picture of Eighteenth-Century England” (1-28) from Black London: Life before Emancipation

Armitage, “John Locke, Carolina, and The Two Treatises”; Linebaugh and Rediker, Chapter 6 in Many-Headed Hydra (174-210); Lenman, “Colonial Wars and Imperial Instability, 1688-1793” and Rodger, “Sea-Power and Empire, 1688-1793,” in Oxford History of the British Empire (the whole book is online through HU’s library database) ; Locke, Chs. I-IX, from Second Treatise of Government ; Lowe. “The Intimacies of Four Continents” in Haunted by Empire; Lowe. “A Fetishism of Colonial Commodities” from The Intimacies of Four Continents; Trouillot. Chapter 2 in Silencing the Past: Power and the Production of History; Yang. Intro in Performing China: Virtue, Commerce, and Orientalism in Eighteenth-century England, 1660-1760 (the whole book is online through HU’s library database) ; Gilory. The Black Atlantic: Modernity and Double-Consciousness (Harvard University Press, 1993); Wallace. Consuming Subjects: Women, Shopping and Business in the 18th Century (Columbia University Press, 1997).

Sancho. Introduction, Main Text, and Appendix F in Letters of the Late Ignatius Sancho, an African.

Sterne. Sentimental Journey (1768)  excerpt: The Starling scenes. In this edition, see pages 24-38. The handout in class is from Bartleby.

*Fielder. “The Woman of Colour and Black Atlantic Movement” in Women’s Narratives of the Early Americas and the Formation of Empire

Watch: Belle (film) – If you have trouble watching the film, please let me know as soon as possible. A DVD is also available upon request.

Gerzina. “Sharp and Mansfield: Slavery in the Courts” in Black London; Draper. Intro and Chapter 1: “The Absentee Slave-Owner: Representations and Identities” (pdf in two files: Part 1 and Part 2) in The Price of Emancipation: Slave-Ownership, Compesnation, and British Society at the End of Slavery; Moody. Posts tagged with “Lord Mansfield”; Steedman. “Lord Mansfield’s Women” [this article is also in her book, Labours Lost: Domestic Service and the Making of Modern England (Cambridge University Press, 2009)] – New since syllabus: Iwanisziw. “Intermarriage in Late-Eighteenth-Century British Literature: Currents in Assimilation and Exclusion.“Eighteenth-Century Life 31.2 (2007): 56-82.

NB: clarifications to the above section on excerpts has been added to this site, and are not reflected on the syllabus.

All Appendices in Obi, or, The History of Three-Fingered Jack (1800).

Boulukos. “Maria Edgeworth’s ‘Grateful Negro’ and the sentimental Argument for Slavery”;Aravamudan, Tropicopolitans: Colonialism and Agency, 1688-1804 (Duke University Press, 1999) – see library, or you can borrow my copy.

Excerpts will be provided from Narrative of Two Voyages to the River Sierra Leone During the Years 1791-2-3, in a Series of Letters (1794), Secret History; or, The Horrors of St. Domingo (1809), and Journal of a Lady of Quality.

*Smallwood. Introduction. Saltwater Slavery. ~ An e-version of this book is available through HU libraries.

Morgan. “‘Hannah and Hir Children’: Reproduction and Creolization Among Enslaved Women” in Laboring Women Reproduction and Gender in New World Slavery –  (this entire volume is also available as an ebook inthe WRLC catalogue);

Anonymous. Intro, Main Text, and all Appendices in The Female American: Or, The Adventures of Unca Eliza Winkfield (1767)

Hulme. “Black, Yellow, and White on St. Vincent,” in Global

NB: the links for the plays above go to digitizations of older editions. If you would like a scholarly modern edition, with footnotes, glosses, etc., use these links:  Beggars Opera and Polly.

* Newell. Intro, Chapter 7, 8, and Epilogue from Brethren by Nature: New England Indians, Colonists, and the Origins of American Slavery

See the resources at BostonMiddlePassage.org on New England Slavery; Gagnon and Green articles on Britton Hammon in Journeys of the Slave Narrative in the Early Americas.(to be scanned, but I have a copy if you wish to read it beforehand.)

Some fast, but interesting reading/listening material.

Moved to Suggested: Turkish Embassy Letters of Lady Mary Wortley Montagu; Lady Maria Nugent’s journal; The Hart Sisters: Early African Caribbean Writers, Evangelicals, and Radicals( Ed. Ferguson) [I have hard copies of the Montagu and Hart books that you can borrow, if interested]

Work on your Abstracts and Bibliographies!!

Unit III: Beyond the Atlantic:

Abstract and Bibliography Due

Colley. “The Narrative of Elizabeth marsh: Barbary, Sex, and Power,” Joseph “Proxies of Power: Woman in the Colonial Archive,” Teltscher “The Lama and The Scotsman: George Bogle in Bhutan and Tibet, 1774-1775” in Global 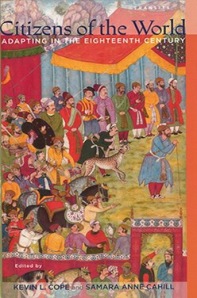 See especially: Preface, Introduction, Czennia. “Wide-Open Hemispheres: Punch Bowls, Punch, and World Citizenship in Eighteenth-Century British Culture”; Chew. “‘The Story is Now About Us’: Olive Senior to ‘England’s Wealthiest Sons‘”; Duncan. “Avast Ye Mateys! There Be Pirates Here—But How will We Recognize Them?”; Spencer and Nguyen. “Sea and Mulberry: Hồ Xuân Hunong, Nguyễn Du, and the Establishment of a Vietnamese National Literature”

Monday, May 2nd, by email before midnight

This course is taught by Dr. Emily MN Kugler at Howard University.